There’s a new internet trend where women publicly shame men who send them abusive or hostile messages on online dating sites like OkCupid and Tinder. Here are some examples from Alexandra Tweten’s instagram byefelipe: 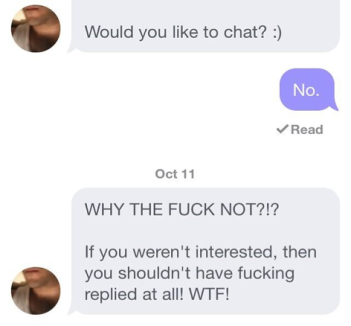 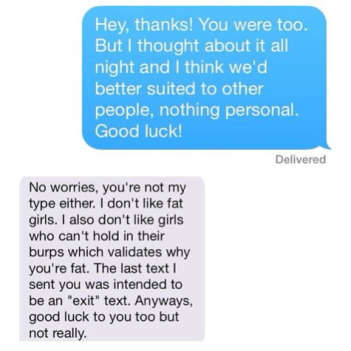 When I first saw these screenshots, I thought they were pretty funny. There’s entertainment value in seeing grown men drop the civilized-person charade to unleash their inner 13-year-old self who calls you a “fucking asshole gaylord” when you beat him at Halo.

But the more I saw, the less funny it got.

I stopped laughing at the tantrum-throwing man-children and started sympathizing instead. After seeing hundreds of these screenshots, on byefelipe and similar blogs, I suspected it’s a symptom of a common problem men have. Alexandra thinks it’s misogyny and a toxic sense of entitlement:

After seeing these disturbing messages grouped together, it’s easy to come to the conclusion that our society has a misogyny problem… the thing that drives men to brutally injure women who ignore them are all connected to the sense of toxic entitlement some men possess.

Misogyny is commonly defined as a hatred, dislike, or mistrust of women. And yes, if these men were misogynists, their messages would probably look a lot the one’s in Alexandra’s collection.

But “misogyny” is unnecessarily used here as a label for a more common and less complex behavior that many people exhibit. As I’ve alluded above, young boys and immature men often have temper issues that result in a bout of low-grade insults. Whether they’re denied a chance at having sex or making the game-winning headshot, these men who can’t control their anger will eventually make it known.

Labeling this sore loser behavior popping up in online dating as “misogynistic” might be technically correct, but it distracts us from what’s actually going on:

There’s a population of men whose egos are constantly battered by frequent rejection, all the while feeling hopeless, frustrated, and confused throughout the beating. With their egos in critical condition, they desperately look for a quick relief. And blaming women who reject them does the job well. It absolves them from taking personal responsibility for their failures, which helps their ego live to see another day.

They’ll believe they’ve been playing the game right all along, and that they’re only being rejected because she’s a huge bitch, highly superficial, low class, or just clueless about social/dating norms. But these are the smarter and more mature sore losers. Most don’t even bother rationalizing their anger, they just feel a strong impulse to harm that which they hate.

And that’s when verbal abuse comes into play.

They transform into a shitty emotionally abusive machine that fires out schoolyard bully insults, the lowest form of insults. A good insult requires careful observation of your target’s flaws and sufficient communication skills and self-awareness to express your observations and feelings about them.

The schoolyard bully insult is a lot easier to manufacture:

With this perspective, it’s hard to make the case that the Bye Felipe phenomenon is evidence of a misogynistic culture. More appropriately, it’s evidence of immature, frustrated, and confused men playing a game they suck at. It’s similar to what inspired the Xbox Live boy to eloquently call his opponent a “fucking asshole gaylord”. It’s weak evidence the boy is homophobic, and strong evidence he’s just an immature sore loser.

Alexandra admits there’s a larger problem at play that she can’t identify:

I have been asked multiple times, “What’s the answer to this? What can these dating sites do to curb this problem?” And I struggle to answer, because this is just a symptom of a larger problem

Alexandra, a self-proclaimed feminist writer since 2010, is right that what she’s experiencing is a symptom of a larger problem, but she’s too blindsided by her feminist perspective to realize that the problem is unrelated to misogyny and self-entitlement. The problem is that immature, low self-esteem men who don’t understand women have started online dating.

The problem is that immature, low self-esteem men who don’t understand women have started online dating. These men should be getting help instead of being publicly shamed.

Bye Felipe doesn’t address the underlying issues, it just showcases the symptoms. It’s analogous to posting videos of people with Tourette’s syndrome cursing women in public and blaming it on the patriarchy without acknowledging the Tourette’s.